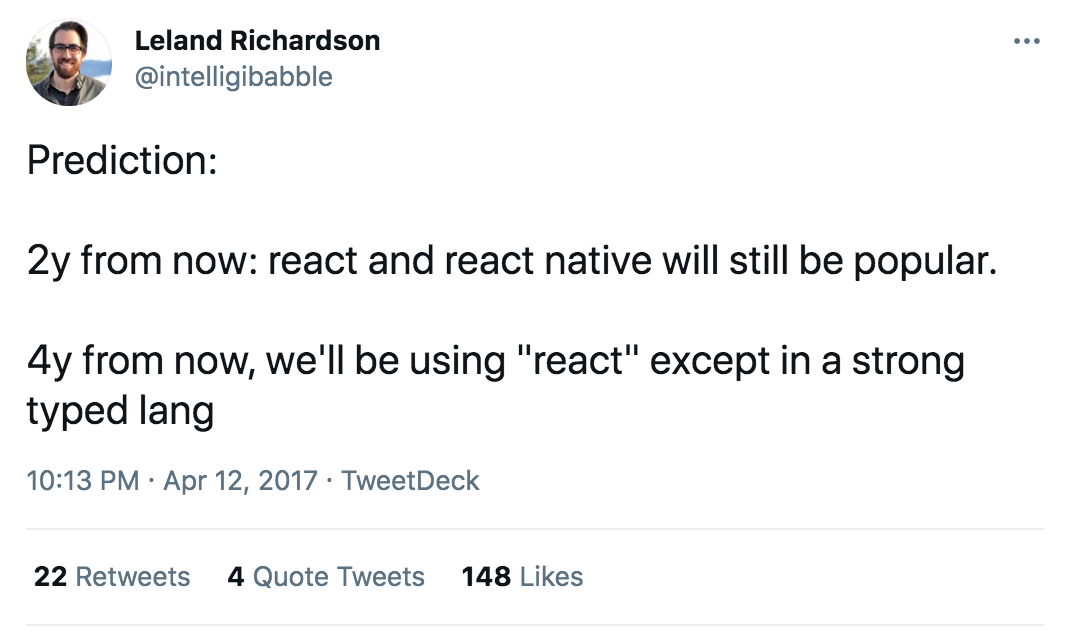 4 years ago, Leland Richardson made a prediction about the future of the state of the web. They predicted that in 2 years, React – web and native – will still be popular, and that in 4 years, we'll still be using it – except in a strongly typed language. Let's explore.

The State of React

According to the State of JavaScript survey, Web Almanac and our internal developer data (also the fact that we're still in business) – it is clear that React is still popular today. Even better, a cursory glance at the npm package statistics strongly indicates that there is continued growth, even today!

The bet that React has made since its inception about a declarative approach to building effective web applications proves to be ever popular, with even industry giants such as Apple creating similar tools such as SwiftUI. We find that the strong component-driven model of React is what really drives its success, along with its general lack of opinionation which has spawned a sprawling ecosystem of JavaScript modules to meet various domain-specific needs that modern web applications have.

Laurie Voss' talk from JSConf EU in 2019 makes the claim that React has conquered the web. This is a claim that Laurie further substantiates in the talk, citing its component model and adoptability as strong reasons for its dominance.

The State of React Native

This is where things get interesting. While it is without a doubt still strongly popular according to the latest data from StackOverflow, Statista, GitHub (even GitHub stars over time) and Google Trends, it is nearly taken over by Flutter entirely, with Flutter coming out on top in 50% of the studies we looked at.

It's worth noting here that Flutter uses a language called Dart, which is a strongly typed language that can be thought of as a hybrid between JavaScript and Java. We'll come back to this later.

Based on all of the data we've examined so far, the 4 year prediction is looking really strong. The final link we'd like to look closer at is the part about strongly typed languages from Leland's original tweet.

What is a Strongly Typed Language?

Strongly typed languages are programming languages that are compiled ahead of time in order to ensure that the contracts established between various parts of code are compatible.

In strongly typed languages, errors like these become impossible since the language itself catches these errors before the code is even executed. This signals to the developer that the code itself is not valid and cannot be expected to run without error.

When looking at our engineering internally at G2i, external demand from our customers, or the latest web surveys, React coupled with strongly typed languages – like TypeScript – seems to be all the rage today. As a declarative abstraction layer atop imperative DOM APIs, React greatly increases the velocity of UI engineering, though sometimes, JavaScript-based React projects tend to leave users wanting.

When combined with a strongly typed language, however, this problem goes away entirely, allowing for a much more pleasant end-user experience.

The final talking point we'd like to address from Leland's original tweet is the use of quotation marks around the 4 year prediction. While we have not yet confirmed the intent behind them, we infer that the quotes allude not to React as we know it today, but a React variant – like ReasonReact for example.

Given the data, there does not appear to be solid adoption of React variants. We are seeing little to no adoption at all of strictly strongly typed React variants. Instead, we at G2i have received the following distribution of requests for fulfillment per technology since January of this year.

Across the board, these requests either required or benefitted from a working knowledge of TypeScript, though we have not yet seen demand for other strongly typed languages.

G2i has also seen an increase in businesses looking for TypeScript expertise and 47% of businesses have selected "TypeScript" as a specific Developer Skill they were looking for.

Leland Richardson was spot on with their predictions. If we recognize our take on the double quotation marks as conjecture and cross-reference the tweet with actual data available today: 4 years later, we strongly see every projection fulfilled.

Watching the ever-evolving landscape of the modern web is exciting and, like most, we've got our ears to the ground constantly paying attention to where it's headed.

Where will we be in the next 4 years? Let us know on twitter.

If you’ve been a JavaScript developer for a little while, you’ve probably read or heard about TypeScript.

When Shape Up goes well, it's a brilliant process. However, things haven't always gone well. Those stumbles and failures have led me to 5 rules for success with Shape Up.

Use your No to guard your Yes
Chris Severns

Why saying no is essential if you're going to make your yes count.